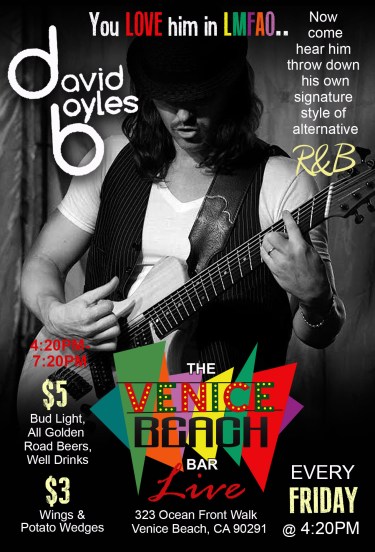 If you haven’t been in to see the AMAZING David Boyles, what the hell are you waiting for??? This guy is INSANELY talented and happy hour is a BLAST with him on our stage! He’s here at 4:20 – 7:20, come on down!  View video below.

About Davide Boyles:   David Boyles brings a fresh approach and a seasoned history to every aspect of his musical endeavors.

Whether serving as musical director, producer, writer, singer and guitarist for top pop act LMFAO, developing up and coming artists, or composing for film and television, David possesses the musicality, knowledge, and experience to deliver artistic vision and professional results.

A musician of purpose and intention, David ventured cross-country from the beaches of North Carolina to the coast of Los Angeles after earning a BFA in Music from Western Carolina University, with a concentration in jazz bass performance and jazz guitar.

Boyles independent release “Bedroom Demos” was picked up by DIAA/Domo records in 2005 and got the attention of Columbia Music Entertainment in Japan. In 2005 CME signed Boyles and released the album “Thank You” which, combined with the “Bedroom Demos” import, yielded a #1 record at Tower and HMV stores throughout the country.

The record also produced four top ten singles to radio, with two tracks “Sunshine” and “Thank You” reaching the number one position. “Southern Fried,” was released on CME in September 2006 with “Home to Stay” debuting at number 21 to radio. “Monophonic”, was released in September of 2010 through HEI International in Japan, as well as domestically through iTunes.

On his release entitled “8 String Demos” (February 2016), the singer/songwriter offers up a collection of songs that are tied together cohesively through the use of a custom 8 string guitar Boyles developed with Chapel Hill N.C. luthier Wes Lambe in 2010.

“I had the guitar for about two months before hitting the road as LMFAO’s Musical Director”, Boyles says. After three years of extensive touring with the group which ended in 2013, David found himself dedicated to the 8 string exclusively, writing and woodshedding to make up for time away from the instrument.

The hybrid guitar consists of the lower three strings of a bass and the top five strings of a guitar, each feeding separate amplifiers. Developed as a natural progression, this enables Boyles to pay both bass and guitar parts simultaneously.  After catching virtuoso Charlie Hunter in 2009, the inventor of the 8 string concept, Boyles finally found his voice.

Fast forward to 2016, and we find Boyles offering up his own sonic footprint on the instrument.  “8 String Demos” features drummer Sheven Morris, who accompanies David at their weekly residency Wednesdays at Melody Bar and Grill in Los Angeles.  “8 String EP” is a collection of recordings Boyles also has released in 2016.

On the new single “Paradise” (September 2016), we find Boyles returning as multi-instrumentalist and producer.

“I feel very fortunate to have had experiences that have shaped my musical landscape,” Boyles adds.  “Sometimes the best thing for growing as an artist is to involve yourself with projects that aren’t necessarily familiar or comfortable.”

Staying true to the history of the building The Venice Beach Bar is home to casual drinking and dining on the famed Venice Boardwalk.