The Other Venice Film Festival

VisitVeniceCa
Annual Events, Art and Culture, Featured Event, Things to See and Do

The Other Venice Film Festival (OVFF), is an International event dedicated to screening full-length, short, doc, experimental, music video, youth films and animated works that embody the spirit, energy and diversity of Venice.

About the festival:  Venice, CA has always been an epicenter for LA artists and filmmakers who continue to pave the way toward expanding the language of underground, alternative cinema. The Other Venice Film Festival bridges the community of Venice and that of greater Los Angeles together in a competitive, fun-filled weekend of movies and mayhem.

The Abbot Awards are given to filmmakers who exemplify maverick filmmaking, by creating stunning and poignant cinema. These films, often hilarious or tragically absurd, are made without the benefits of large budgets and technological wizardry. These filmmakers share the spirit and artistic energy of Venice’s founding father Abbot Kinney. In honoring these filmmakers who adhere to their singular vision, we honor our Venetian benefactor, Abbot Kinney.

All films that screen at the festival, with the exception of Spotlight Screenings, are in competition for an Abbot. Short films as well as features qualify for Audience Choice and Most Excellent Abbot Awards. The Local Maverick Spotlight Abbot Award is given to a local established filmmaker who creates unforgettable celluloid and kick ass flicks. 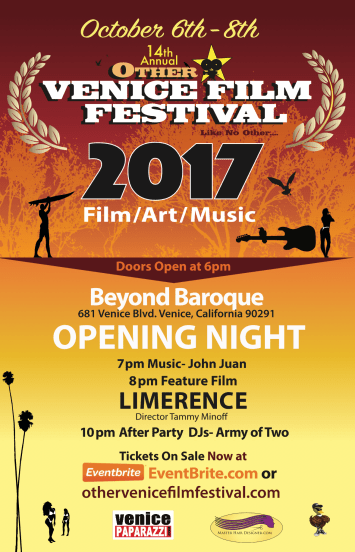 GET YOUR TICKETS NOW OR BE PART OF THE 2017 OTHER VENICE FILM FESTIVAL!

Venice Paparazzi was on the scene at the 2016 Other Venice Film Festival’s Awards ceremony at Beyond Baroque.  View slideshow for all 2016 event photos.