Let’s have a short history lesson on this magical place.

Venice was founded by tobacco millionaire Abbot Kinney on July 4, 1905. Kinney’s idea was to created a place dedicated to health, higher learning, and education.  His vision was a place where people would come to relax and enjoy the ocean air while following intellectual pursuits.  After opening, Kinney brought in professors and writers to deliver lectures to what he thought would be well attended seminars.  Much to his dismay, the idea flopped!  It turned out people were much more interested in carnival rides and side show attractions.  So, Kinney gave the people what they wanted. He built and amusement park, a pier, a miniature steam train, 16 miles of canals with gondola rides, and more.

Time went on, the oil boom dwindled, and WW2 came to an end. The newly remodeled and renamed Lincoln Place apartments were originally built to house WW2 veterans.

As the 1950’s got going, bodybuilding became all the rage in Venice.  The original Muscle Beach in Santa Monica  inspired a culture of outdoor fitness, weightlifting, physique contests, and gymnastics.

In the 1960’s the Beatniks, followed by the hippies, migrated to Venice.  Cheap rent and a vibe of individuality fed a culture of artists, musicians, and poets. Famously, The Doors formed in Venice in the late 60’s and were a staple around the Venice/Santa Monica area. 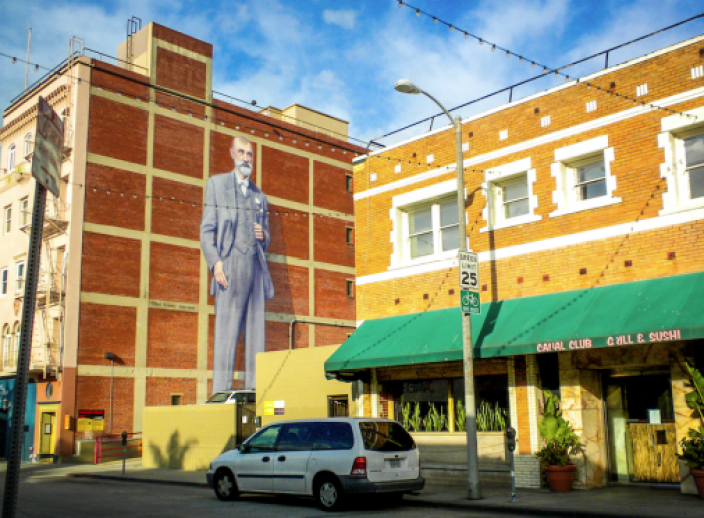 Then came skateboarding.  Originally known as sidewalk surfing, Venice is largely credited as being the birthplace of modern skateboarding.  The pioneering Zephyr team, home to Jay Adams, Tony Alva, Stacy Peralta and many more, was run by Jeff Ho out of a local shop. They eventually  became known world wide as one of the most influential skate teams ever.

In the 1980’s the crack epidemic hit Los Angeles, and Venice had its own problem with gang wars. This continued into the 90’s and Venice’s reputation as a rough town was well warranted.

In 2000 the city re-did the boardwalk. Part of this process was to tear down the Pavilion, which had been a make shift skatepark for years.  People would bring in plywood and make ramps, or just skate on the existing concrete structures. On Oct. 3 2009, after many years of activism on the part of Geri Lewis and others, the famed Venice Skate Park opened on the beach.

Through the first decade of 2000, Venice continued to go through changes.  A large influx of tech companies drove up real estate prices in the area and there was a constant dialogue about what is happening to Venice’s cultural roots.

As the 2010’s got rolling, a new and larger wave of tech. companies made Venice their home.  Most notably Google and Snap, showed up and set up shop.  One side effect thousands of techies moving to the V  was that the landlords could now charge more for rent.  There was some serious displacement and many of locals were none to happy.  As the decade neared the end there was a massive influx of homeless people setting up encampments on public sidewalks, and this is still the case today.  Now to be accurate, Venice has always had some homeless.  However, this is different.  These are mostly younger people not from the area, some with dogs, who have shown up by the hundreds to stake a claim on the public right away as their own personal campground.   Most folks think this is a result of the City of Los Angeles’ law that allows people to put up  tent on the sidewalk between the hours of 9:00 p.m. and 6:00 a.m. as long as a wheel chair can get by.  And if it is raining, or below 60 degrees, the tent can stay up all day.  Currently most residents are fed up and think the politicians are to blame for years of misguided and naive policy decisions.  Whatever the case, the situation is a dangerous eyesore in our great town.

Some cool facts about the V:

“Abbot Kinney and the Story of Venice” by Edward Biberman shows the town’s founder with frolicking beachgoers on one side and oil workers on the other. (Anthony Peres / Los Angeles County Museum of Art) . Photo found on LATimes

Check out Venice Heritage Museum for more info or to support getting a museum in Venice!

Did you know that Venice, California’s founder Abbot Kinney birthday is on November 16th?