Here is a great website on the history of Venice, Ca  Westland.net

Visit Don Westland’s website  www.westland.net/venicehistory for more on Venice History. His interactive educational site (online since 1996) covers the history of Venice Beach, California. It features timelines, historic articles and photographs, interactive maps that when clicked on show historic views, and a list of movies filmed on Venice’s streets, amusement piers and canals.

Here is a good book on Venice, California history! 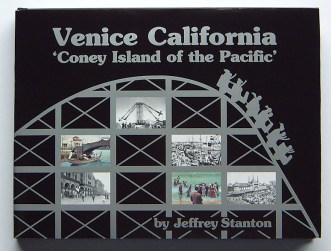 Pick up a copy of Jeffrey Stanton’s book “Venice, California – Coney Island of the Pacific.” You can find him on the Venice Boardwalk on the weekends!  The book contains over 300 photographs, mostly B/W, but a few in color appeared as postcards or are more recently taken photos by the author. Many are full page-sized archival quality photographs of great historical interest. Additionally, there are a half-dozen schematics of amusement park layouts.

There is extensive well-written & well-researched textual material on the rise and fall of Venice, its heritage & many eccentricities over the past 100 years.

You can also order online here! 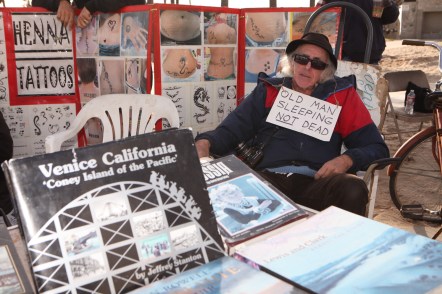 Jeffrey Stanton is best known for his historic work on Venice, California. He has the largest known collection of antique post cards and vintage photographs of Venice, California during it’s turn-of the century heyday.   Jeffrey began collection photographs of Venice and its amusement piers in 1978. By 1987 his archive had grown to over 600 quality photographs of pier aerials, the resort’s amusement rides, its parades, canals and business district. Above info found on  http://www.westland.net/venice/stanton.htm.

“Venice, originally called “Venice of America,” was founded by tobacco millionaire Abbot Kinney in 1905 as a beach resort town, 14 miles (23 km) west of Los Angeles. He and his partner Francis Ryan had bought two miles (3.24 km) of oceanfront property south of Santa Monica in 1891. They built a resort town on the north end of the property, called Ocean Park, which was soon annexed to Santa Monica. After Ryan died, Kinney and his new partners continued building south of Navy Street. After the partnership dissolved in 1904, Kinney, who had won the marshy land on the south end of the property in a coin flip with his former partners, began to build a seaside resort like its namesake in Italy.

When Venice of America opened on July 4, 1905, Kinney had dug several miles of canals to drain the marshes for his residential area, built a 1,200-foot (370 m)-long pleasure pier with an auditorium, ship restaurant, and dance hall, constructed a hot salt-water plunge, and built a block-long arcaded business street with Venetian architecture. Tourists, mostly arriving on the “Red Cars” of the Pacific Electric Railway from Los Angeles and Santa Monica, then rode Venice’s miniature railroad and gondolas to tour the town. But the biggest attraction was Venice’s mile-long gently sloping beach.”  Click here to read more.